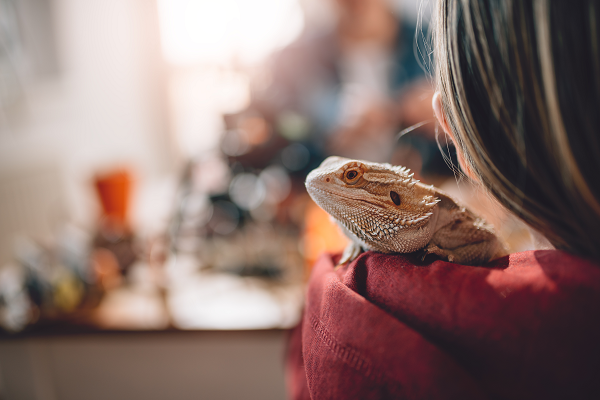 Bearded dragons are well-known small to medium-sized lizards. They are currently considered one of the most popular pet lizards for all ages. There are eight species of bearded dragons, but the most popular one is the inland or central bearded dragon (Pogona vitticeps) from the arid to semi-arid southeastern parts of Australia. They are commonly bred in captivity in the US and Canada. This handout will mainly focus on this species.

Owners often refer to their pets as 'beardies'. They are attractive, heavy-bodied lizards with flattened trunks and broad triangular heads. They have a spiny pouch (or beard) under their chin that can be expanded and will also turn black when they are threatened or are aroused during mating. They have a characteristic series of spines projecting horizontally from the sides of the body, running from the head to the base of the tail. Full-grown healthy adults can reach 18-22 inches (45-56 cm) from the tip of the nose to the end of the tail. There are a wide variety of color and skin texture mutations being commonly bred, so there are many options for the right bearded dragon that suits your fancy. Color variations can range from tan to dark brown or bright orange. A new variation known as a ‘leatherback’ has very smooth scales and a limited number of spikes on the head and sides.

Sexing bearded dragons under three months of age is very challenging. In the adult, the male has larger femoral pores (used for scent marking) located on the underside of the thighs just in front of the vent. Male bearded dragons are slightly larger than females and have larger heads and darker 'beards'.

The young are semi-arboreal (live in trees) and the adults are mostly terrestrial, climbing occasionally to bask or search for prey. Captive bearded dragons can live about 7-12 years if properly cared for.

Bearded dragons are omnivorous, requiring both plant and animal-based foods as part of their diet. Bearded dragons exhibit a unique behavior called ‘arm waving’, as that is what the behavior looks like. They lift one arm slowly and then slowly put it down again. A slow head bob often accompanies the wave. The purpose of this action is not entirely understood but is believed to be a form of communication, possibly indicating submission to a more dominant animal.

"Bearded dragons are highly social, friendly, animated, curious, docile, and gentle animals that are easy to tame and are very responsive to their owners."

Bearded dragons are highly social, friendly, animated, curious, docile, and gentle animals that are easy to tame and are very responsive to their owners. Bearded dragons are hardy, robust, eat well, and have a varied diet (see handout “Bearded Dragons – Feeding” for more information). Bearded dragons can make great pets if cared for properly. Please do your homework and research as much as possible about this type of pet before bringing it into your life. They are suitable as pets for older children if they are properly supervised.

How do bearded dragons differ from other pets?

How do I select a bearded dragon?

Most owners buy bearded dragons from breeders or pet stores. They breed well in captivity and are widely available. Young, captive-raised animals make the best pets. Older, imported animals are harder to tame, may harbor intestinal parasites, and often suffer from the stress of imposed captivity.

"Older, imported animals are harder to tame, may harbor intestinal parasites, and often suffer from the stress of imposed captivity."

Start out right with a healthy pet:

Does my bearded dragon need to see a veterinarian?

Your bearded dragon should be examined by a veterinarian familiar with reptiles within 48 hours of purchase. A thorough physical examination includes determining the animal's weight, as well as an assessment of the oral cavity, eyes, skeletal condition, and overall alertness. Your veterinarian will also check for obvious physical abnormalities. A microscopic examination of the feces (stool) should be done to check for gastrointestinal parasites. Many bearded dragons (even those bred in captivity) have pinworms or other gastrointestinal parasites, so your bearded dragon may require treatment for these parasites (generally, these pinworms are not transmissible to people).

© Copyright 2022 LifeLearn Inc. Used and/or modified with permission under license.